“Lena’s house” is a mykonian townhouse of the 19th century, part of a larger building that belonged to the war hero – captain Nicholaos Sourmelis, and can be found in the centre of Mykonos town, Chora, in the area “Tria Pigadia”.
It became a part of the collection in 1970, after a donation by George and Ioanna Drakipoulou, along with many of her furniture and various other items.
The name “Lena’s house” refers to its last inhabitant, Lena Skrivanou. 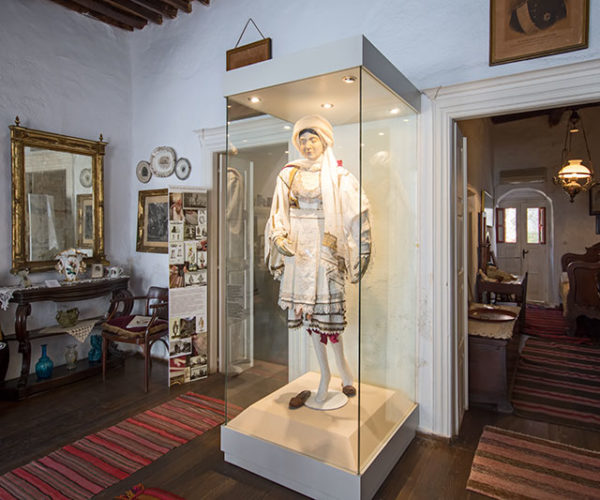 The house consists of a front porch, a living room with a characteristic arched roof support, two bedrooms, as well as a smaller back yard along with a pigeon house. Various notable furniture from different eras and styles come together to reconstruct what life would look like in the 19th century. The handmade embroidery and a series of French engravings decorating the rooms along with crockery of the time assist in creating this unique atmosphere.  Additionally, this museum houses two copies of traditional Mykonian dress, inspired by lithographs of 17th and 18th century travellers, who happened to preserve these in colour in their memoires. These have been leased to the museum by the Folkloric-Cultural Women’s Association of Mykonos, and one of the dresses has been commissioned from the renowned scenographer and costume designer Yiannis Metzikof. Lena’s house also has on display a “doulamas” dress from Sifnos, as well as a rendition of the dress of local war heroine Manto Mavrogenous, based on a coloured lithograph by A. Friedel, the creation of which was sponsored his eminence metropolitan of Syros and Mykonos, mr. Dorotheos II.